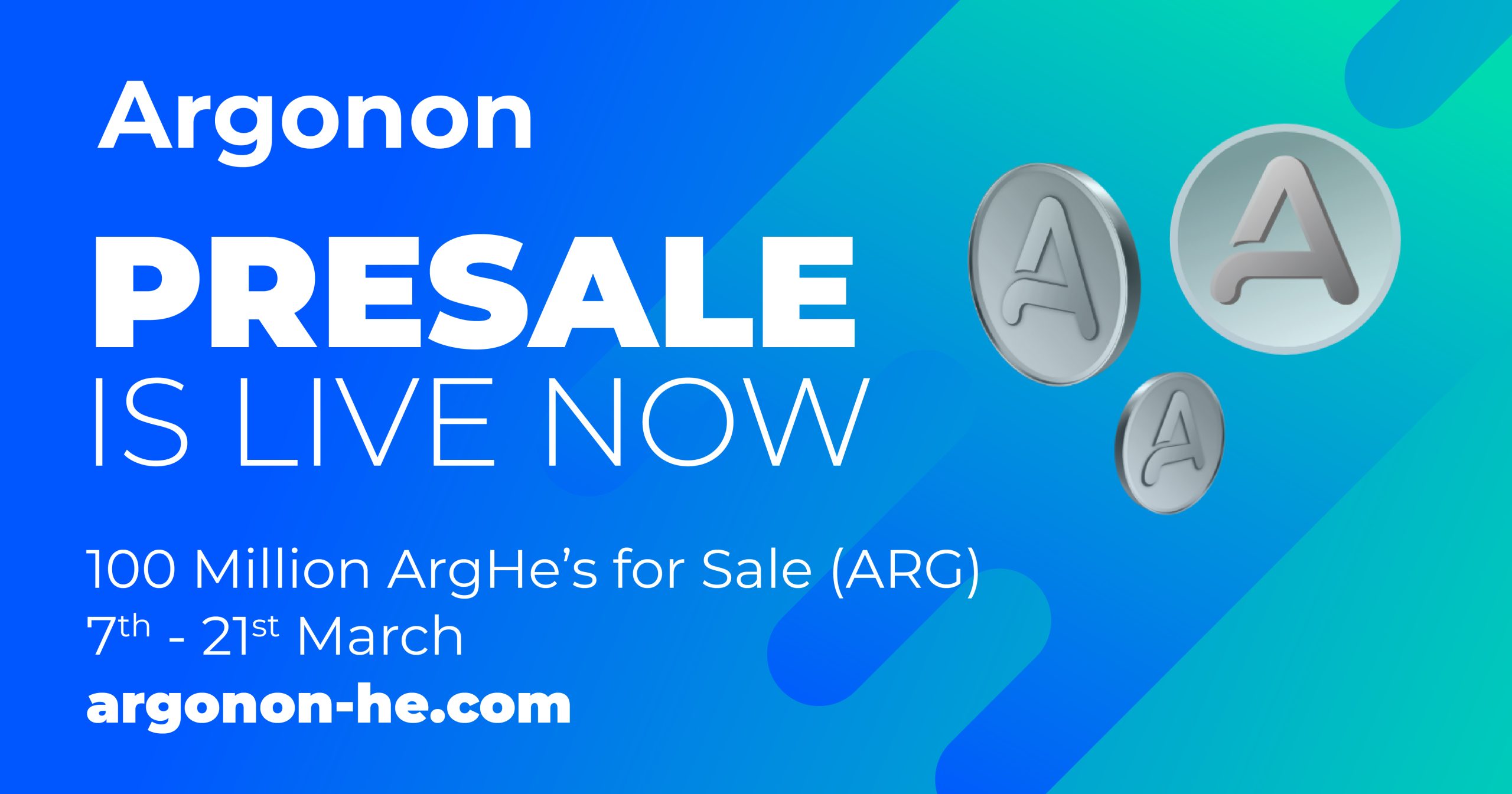 Argonon token presale is open from 7th to 21st March

SOUTH AFRICA, March 6, 2022 /EINPresswire.com/ — At its core, the ArgHe token represents a right to redeem an underlying quantity of helium, a rare natural gas listed on the United States critical minerals list and currently in short supply, mined by Renergen1 from their Virginia Gas Project located in the Free State in South Africa.

The token is built on the Binance Smart Chain (BSC) using the BEP20 standard. It provides a decentralized mechanism for trade and ownership of helium.

The purpose of the ArgHe token is to harness contemporary blockchain technology which offers superior digital security and a wider range of capabilities compared to traditional derivative instruments. The ArgHe helium redemption facility is accessible through the Argonon4 online platform.

Helium is a non-renewable commodity. It is a noble gas made very slowly through the radioactive decay of heavy metals underground such as Uranium and Thorium. The helium gets trapped in pockets of natural gas, where it can be extracted. Once helium reaches Earth’s surface, it can easily escape its gravitational pull and enter the vacuum of space. Hence, helium is a rare Earth element with a limited supply, and a diminishing commodity which cannot be recycled if purged.

Argonon’s initial coin offering (“ICO”) is accessible to clients (and/or investors) through Argonon’s online platform. 100 000 000 ArgHe tokens are offered to the general (international) public in the first round of the ICO. The price of the ArgHe token is based on the corresponding amount of redeemable helium from the Renergen reserve.

Each ArgHe unit corresponds to a single cf of helium as determined by the redemption value predicated by Renergen. Regulation D (Rule 506(c)) under the Securities Act allows exemption for the registration of offerings that are sold to investors who have been verified as accredited investors. Similarly Reg S exempts offerings that are made to non-US persons. If an ICO only uses Rule 506(c), then it must verify every investor as an accredited investor to US standards, including foreign investors. If an ICO only uses Reg S, then it cannot sell to any US person. It’s also important to note that the resale restrictions exist for both Rule 506(c) and Reg S securities, and they differ. This means that purchasers of tokens offered under Rule 506(c) might have different restrictions on how they can exchange those tokens from purchasers of tokens offered under Reg S. Both ICO issuers and purchasers of tokens must comply with the transfer restrictions so that neither allows for an illegal exchange of the tokens. Accordingly, the domicile of clients (and/or investors) purchasing the ArgHe token is recorded as part of the funding and payment capturing process on the Argonon platform. Argonon and its affiliates closely monitor the state of ICO legislation in the respective jurisdictions in which it operates.

Basically, Argonon is Bep20 token based on a real asset & rare element which is Helium, critical to almost every aspect of modern-day life, Renergen is the Helium supplier, an emerging producer of helium and liquefied natural gas (LNG), with existing production and sales of compressed natural gas (CNG).

Listed on SA and AUS stock exchanges! Arg tokens audited by soken.io and will be launched on Pancake and BitMart exchange.

Argonon presale is open from 7th to 21st March, Investors will be able to buy via USD or Crypto ( BUSD ) Exchange rate is 0.275$ for 1ARG

*Launch onto more trading exchanges will be confirmed VERY soon.

Page load link
We use cookies on our website to give you the most relevant experience by remembering your preferences and repeat visits. By clicking “Accept All”, you consent to the use of ALL the cookies. However, you may visit "Cookie Settings" to provide a controlled consent.
Cookie SettingsAccept All
Manage consent

This website uses cookies to improve your experience while you navigate through the website. Out of these, the cookies that are categorized as necessary are stored on your browser as they are essential for the working of basic functionalities of the website. We also use third-party cookies that help us analyze and understand how you use this website. These cookies will be stored in your browser only with your consent. You also have the option to opt-out of these cookies. But opting out of some of these cookies may affect your browsing experience.
Necessary Always Enabled
Necessary cookies are absolutely essential for the website to function properly. These cookies ensure basic functionalities and security features of the website, anonymously.
Functional
Functional cookies help to perform certain functionalities like sharing the content of the website on social media platforms, collect feedbacks, and other third-party features.
Performance
Performance cookies are used to understand and analyze the key performance indexes of the website which helps in delivering a better user experience for the visitors.
Analytics
Analytical cookies are used to understand how visitors interact with the website. These cookies help provide information on metrics the number of visitors, bounce rate, traffic source, etc.
Advertisement
Advertisement cookies are used to provide visitors with relevant ads and marketing campaigns. These cookies track visitors across websites and collect information to provide customized ads.
Others
Other uncategorized cookies are those that are being analyzed and have not been classified into a category as yet.
SAVE & ACCEPT